In recent years, Kubernetes has become a renowned solution for orchestrating cloud-independent infrastructure.

Open Analytics supports the data analysis process end to end. This includes infrastructure that underpins the data science platforms we build. Since we exclusively work with open technology, it should come as no surprise that we adopted Kubernetes early on in our technology stack.

As Kubernetes rose in popularity and maturity, it became an essential backbone to deliver fully open-source data science platforms. With this growth came a need for a clean and reliable workflow for staging maintainable deployments. This is easier said than done, since this is an active space with many tools that overlap in scope. Examples include Helm, Jsonnet and Kustomize.

After gaining experience with different workflows across projects, we found Kustomize to be best in class, due to its excellence at last-mile configuration: the stage where off-the-shelf packages are tailor-fit to specific platforms and environments.

Given this prominence, we set out to extract best practices from the experience of our infrastructure team. We did this to standardize our workflow, but hope that our efforts can be useful to the community as well. 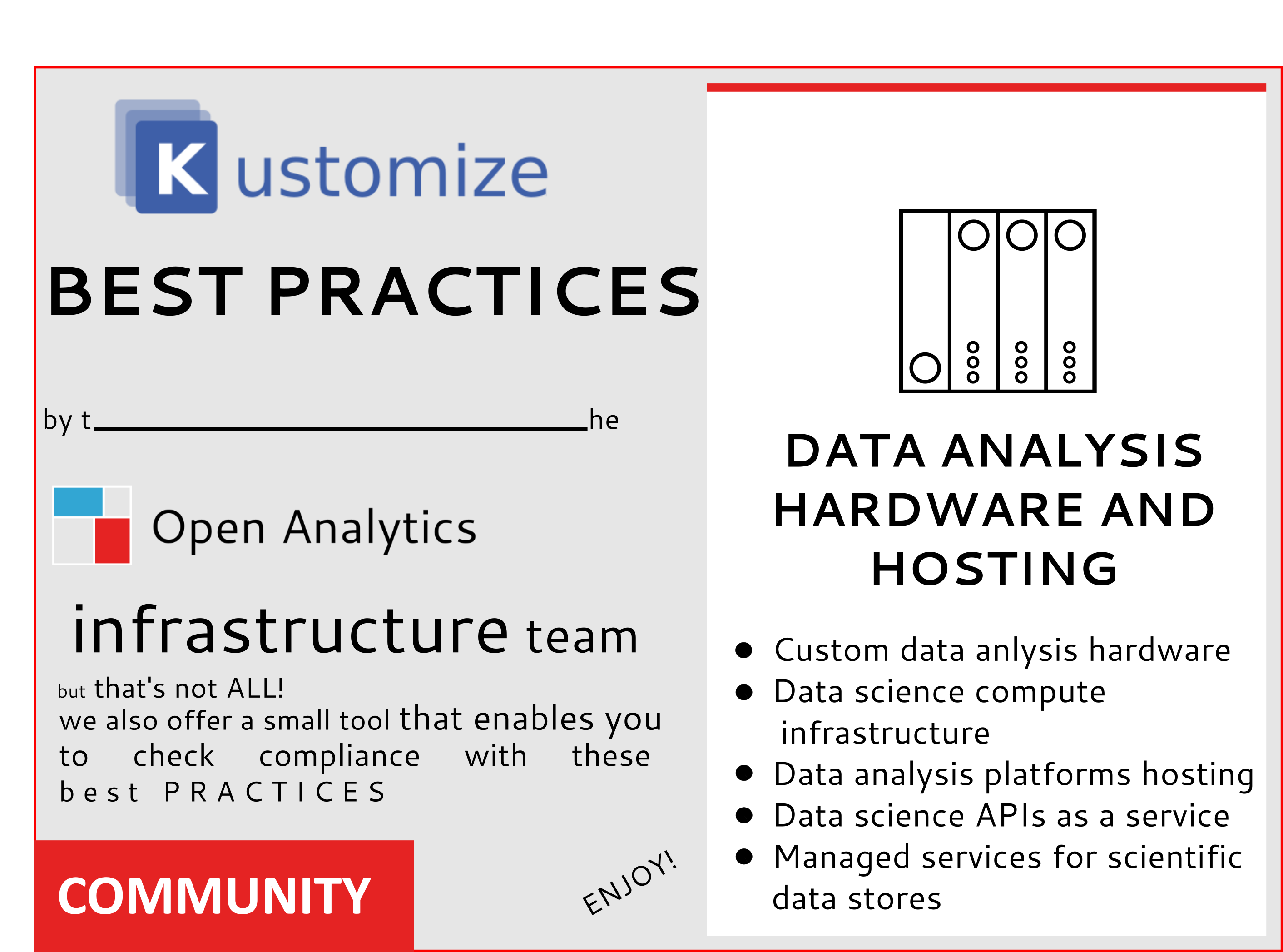 At a bare minimum, all kustomizations should be under git version control. Ideally, deployment should also be automated and tied directly to the kustomize repositories using a GitOps tool like ArgoCD or FluxCD.

Kustomizations should be divided into bases and environment-specific (live) overlays.

One way to implement this division is as top-level directories bases/ and overlays/. This is the standard approach typically found in kustomize examples and works well for smaller projects.

Another approach is to use separate repositories: a base repository and a live repository. We use the term ‘live’ here instead of ‘overlay’ since a kustomization can be both a base and an overlay. ‘live’ communicates the desired intent better: an environment-specific overlay that describes the final form of the infrastructure and should correspond one-to-one to what is deployed on the cluster.

Using repositories instead of folders has several advantages:

It is a good idea to use a consistent naming convention for all repositories. As an example, we use the following format: <project>-[<environment>-]kube-[live|base]

Kustomizations should be treated as code and code should be clean.

We wrote a python script called konform which helps us check and validate our implementation of these best-practices. The script has been made publicly available under the Apache 2 license.

Treating secrets correctly in version-controlled configuration is an interesting problem. Many different approaches and tools have been proposed. They typically fall into one of two camps:

SOPS is a fairly popular tool often found in workflows that use the encryption approach. Specifically for working with SOPS, we uncovered the following best-practices: